Skip to content
Can seroquel be the drug people with MS need to remyelinate their damage axons? #ResearchSpeak #OffLabel

Yesterday some joker mentioned Seroquel (quetiapine) on the blog; he suggested MD had missed a few doses. Paul Simon even popularises the drug in his recent hit ‘In a Parade’ on his album ‘Stranger to Stranger’.

Jokes, and songs, aside quetiapine is an interesting drug. Quetiapine is often prescribed to pwMS to treat psychiatric and non-psychiatric symptoms of MS including depression, anxiety, insomnia, agitation, hypomania, psychosis and rarely as a last resort for some pain syndromes. It has been hypothesised to have off target effects and work as a potentially remyelinating agent. In the non-hypothesis driven drug screen that delivered clemastine as a potential remyelinating agent, quetiapine was one of the hits that came-up very high on the list of potential drugs to promote remyelination.

We now have a path for testing for remyelination therapies in MS, but what we don’t have is a path for repurposing generic drugs (quetiapine is now off-patent). How are we as a community going to solve this thorny problem of repurposing off-patent drugs? We have posted on this issue before and could do with some inspiration. Off-label prescribing is not the solution as it rarely attracts the necessary investment to generate the class 1 data for getting a drug licensed or used in clinical practice.

Multiple sclerosis (MS) is a central nervous system disorder that is associated with progressive oligodendrocyte and neuronal loss, axonal degeneration, and demyelination. Several medications that mitigate immune abnormalities reduce both the frequency of relapses and inflammation on magnetic resonance imaging, leading to improved outcomes for people with the relapsing-remitting form of MS. However, there are no treatments for the progressive forms of MS where neurons and axons continue to degenerate; here, neuroprotective therapies, or medications that rebuild myelin to confer axonal well-being, may be useful. Quetiapine fumarate is an atypical antipsychotic with reported remyelinating and neuroprotective properties in inflammatory and noninflammatory models of demyelination, including experimental autoimmune encephalomyelitis, and both cuprizone- and global cerebral ischemia-induced demyelination. Preclinical studies suggest that quetiapine may exert these effects by stimulating proliferation and maturation of oligodendrocytes, releasing neurotrophic factors, increasing antioxidant defences, scavenging for free radicals, and inhibiting activated microglia, astrocytes, and T lymphocytes. Additionally, quetiapine may be beneficial for psychiatric and nonpsychiatric symptoms of MS including depression, anxiety, insomnia, and possibly even pain. These data indicate that clinical trials are justified to determine the safety, tolerability, and efficacy of quetiapine fumarate in MS. 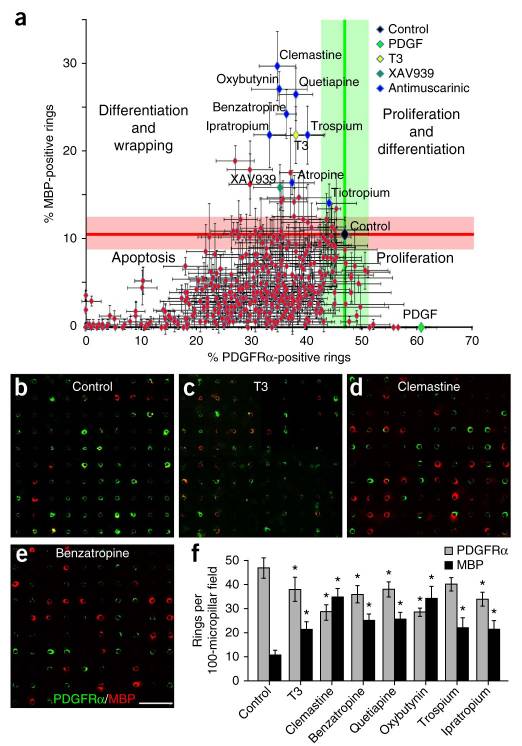 Functional screening for compounds that promote remyelination represents a major hurdle in the development of rational therapeutics for multiple sclerosis. Screening for remyelination is problematic, as myelination requires the presence of axons. Standard methods do not resolve cell-autonomous effects and are not suited for high-throughput formats. Here we describe a binary indicant for myelination using micropillar arrays (BIMA). Engineered with conical dimensions, micropillars permit resolution of the extent and length of membrane wrapping from a single two-dimensional image. Confocal imaging acquired from the base to the tip of the pillars allows for detection of concentric wrapping observed as ‘rings’ of myelin. The platform is formatted in 96-well plates, amenable to semiautomated random acquisition and automated detection and quantification. Upon screening 1,000 bioactive molecules, we identified a cluster of antimuscarinic compounds that enhance oligodendrocyte differentiation and remyelination. Our findings demonstrate a new high-throughput screening platform for potential regenerative therapeutics in multiple sclerosis.

27 thoughts on “#ResearchSpeak & #OffLabel: are you up for taking seroquel?”