“Just received an email query from an MSer about stopping fingolimod after an episode of ophthalmic herpes zoster. They appear to have had a torrid time and may now need a corneal transplant. The bottom line is herpes zoster or shingles is about 2.6x more common in fingolimod treated MSers compared to those treated with placebo. This figure is from the 2-year blinded period of the trials and hence may be much higher than this if the period of observation could be extended beyond 2 years. In other words the cumulative incidence of herpes infections in MSers on fingolimod may turn-out to be very high. Unfortunately, I don’t have a simple answer to the herpes problem. Fingolimod is an immunosuppressive drug and is associated with opportunistic infections, reactivation of herpes viruses, including the Varicella-Zoster virus, and possibly other recurrent herpes infections. As herpes infections can be treated, my approach to the problem is vigilance and early treatment. I look after one patient with recurrent genital herpes that I am managing with continuous prophylactic famciclovir. I prefer famciclovir to aciclovir, or valaciclovir, as it has a longer intracellular half-life and is probably a better anti-herpes drug. The decision to stay on fingolimod is a personal one and depends on how active the MS was before starting the treatment, how well MS disease activity has been suppressed (NEDA-3) and the individual factors that includes other side effects and adverse events, planned pregnancy and aversion to risk. Therefore there is no simple answer to this question.” 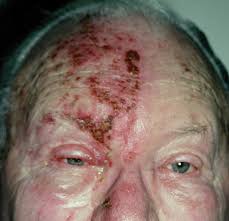 IMPORTANCE: Varicella-zoster virus (VZV) infections increasingly are reported in MSers and constitute an area of significant concern, especially with the advent of more disease-modifying treatments in MS that affect T-cell-mediated immunity.


OBJECTIVE: To assess the incidence, risk factors, and clinical characteristics of VZV infections in fingolimod-treated MSers and provide recommendations for prevention and management.


DESIGN, SETTING, AND PARTICIPANTS: Rates of VZV infections in fingolimod clinical trials are based on pooled data from the completed controlled phases 2 and 3 studies (3916 participants) and ongoing uncontrolled extension phases (3553 participants). Male and female patients aged 18 through 55 years (18-60 years for the phase 2 studies) and diagnosed as having relapsing-remitting MS were eligible to participate in these studies. In the postmarketing setting, reporting rates since 2010 were evaluated.

MAIN OUTCOMES AND MEASURES: Calculation of the incidence rate of VZV infection per 1000 patient-years was based on the reporting of adverse events in the trials and the postmarketing setting.


RESULTS: Overall, in clinical trials, VZV rates of infection were low but higher with fingolimod compared with placebo (11 vs 6 per 1000 patient-years). A similar rate was confirmed in the ongoing extension studies. Rates reported in the postmarketing settings were comparable (7 per 1000 patient-years) and remained stable over time. Disproportionality in reporting herpes zoster infection was higher for MSers receiving fingolimod compared with those receiving other disease-modifying treatments (empirical Bayes geometric mean, 2.57 [90% CI, 2.26-2.91]); the proportion of serious herpes zoster infections was not higher than the proportion for other treatments (empirical Bayes geometric mean, 1.88 [90% CI, 0.87-3.70]). Corticosteroid treatment for relapses might be a risk factor for VZV reactivation.


CONCLUSIONS AND RELEVANCE: Rates of VZV infections in clinical trials were low with fingolimod, 0.5 mg/d, but higher than in placebo recipients. Rates reported in the postmarketing setting are comparable. We found no sign of risk accumulation with longer exposure. Serious or complicated cases of herpes zoster were uncommon. We recommend establishing the MSers’ VZV immune status before initiating fingolimod therapy and immunization for MSers susceptible to primary VZV infection. Routine antiviral prophylaxis is not needed, but using concomitant pulsed corticosteroid therapy beyond 3 to 5 days requires an individual risk-benefit assessment. Vigilance to identify early VZV symptoms is important to allow timely antiviral treatment.

5 thoughts on “ClinicSpeak: more on herpes infection and fingolimod”